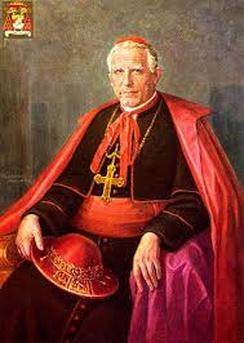 Clemens August Count von Galen (1878 – 1946) belonged to one of the oldest and most distinguished noble families of Westphalia.   He was the son of Count Ferdinand Heribert von Galen, who was a member of the Imperial German parliament (Reichstag) for the Catholic Center Party.

Von Galen received his early schooling at the elite Jesuit boarding school, Stella Matutina, in Austria, where only Latin was allowed to be spoken.  He spent the college years of his education in the Antonianum in Germany. Upon graduation, his fellow students wrote in his yearbook: Clemens doesn't make love or go drinking. He does not like worldly deceit.

In 1899 he met Pope Leo VIII in a private audience, and after that decided to join the priesthood. He studied in Innsbruck and Münster and was ordained in 1904.  He was moved to Berlin, where he was assigned as parish priest at St. Matthias Parish working among the poor. In 1920 he was called back to Münster to serve as parish priest of the Church of St. Lambert.

Von Galen was appointed bishop of Münster, at age of 55, during the critical year for Germany of 1933.

Immediately after his consecration in November, he began to campaign against the totalitarian and pagan approach of Adolph Hitler in national education. In a pastoral letter during Lent 1934, Bishop von Galen forcibly denounced the Nazi ideology as being heathen and offensive to God. He further declared it completely unacceptable for German Catholics when the Nazis refused the Holy Scriptures of the Old Testament because of its “Jewish authorship”.

In 1938 von Galen was registered by the Nazi Chancellery of the Reich as one of most dangerous adversaries of the regime because of his “attacks on the foundations and feelings of National Socialism”.  In the summer of 1941 he preached three public sermons against the Nazis that stunned Germany and made his name a household world around the globe.  Designated “The Lion of Munster” for his courage. his sermons were copied by any means possible and distributed by both Catholics and Jews throughout Germany and its occupied lands.

The third of those sermons concerned the 5th commandment.  It was judged by the Nazi Office of Propaganda to be “the fiercest frontal attack unleashed on Nazism in all the years of its existence”.  The bishop had learned directly of the plan to exterminate the invalids, old people, mental patients, and handicapped children of Westphalia.

His language was strong: “A curse on men and on the German people if we break the holy Commandment ‘You shall not kill’”.   Woe to us German people if we not only license this heinous offense but allow it to be committed with impunity.”  “Now defenseless innocents are killed, barbarously killed; people also of a different race, of different origins are suppressed... We are faced with a homicidal folly without equal... With people like this, with these assassins who are proudly trampling our lives, I can no more share belonging to the same people!”  And he threw at the Nazi authorities the words of the apostle Paul: “Their God is their stomach.”  Of everything he said during this sermon, perhaps the most effective was when he asked whether the returning permanently injured German soldiers and sailors would fall under the euthanasia program as well. “Woe betide our soldiers who return home wounded, disabled, or sick.”

Despite public protests in 1941, the Nazi leadership continued this program of euthanasia in secret.  About 200,000 disabled people were murdered between 1940 and 1945.

Cemetery where the victims of euthanasia killing were buried.
Hadamar, Germany, April 1945.

The Nazis pondered what to do about the Cardinal. They eventually retaliated by arresting and then beheading three parish priests who had distributed his sermon, but left the Cardinal unharmed to avoid making him into a martyr.  Von Galen continued to be the foremost domestic foe of the Third Reich.

The bishop was placed under house arrest, and later only the Nazis’ fear of a major uprising in very Catholic Westphalia prevented his being taken to Dachau. Twenty-four priests from Bishop von Galen’s own diocese were arrested and deported, and he knew that it was because of his activities rather than just their own that they had been made victims.

After the end of the war, the bishop was honored by the Church by being made a cardinal. The Holy Father imposed the red hat, and, as he leaned forward to embrace von Galen, said, “I bless you. I bless your country”.  When von Galen turned to face the vast crowd he was greeted with a storm of applause, led by the other cardinals, which lasted several minutes.   The press, then, reported what was at that moment evident to all: von Galen was the symbol of “the other Germany” that had refused to conform, and recognized in the conferment of the dignity of cardinal “an honoring of the manly defender of the Christian truth and of the inalienable rights of man that the totalitarian State had not eradicated.”

Tragically, he died on March 22, 1946 of a perforation of the appendix diagnosed too late, only a month after going to Rome to receive the honor from Pope Pius XII.

The process for the beatification of Clemens August Count von Galen was opened by his successor, Bishop Michael Keller of Münster in October 1956.  He was beatified on October 9, 2005, at Saint Peter's Plaza, Vatican, by Pope Benedict XVI.

Thanks to Order of St. John of Jerusalem, Rhodes and of Malta for the basis of this narrative.