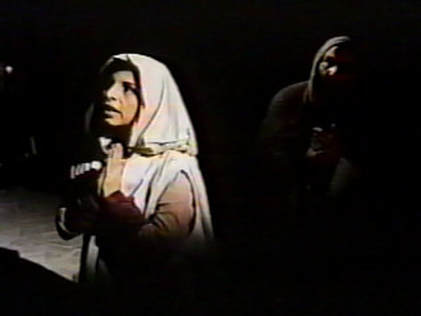 Blessed Margaret of Castello, Virgin -
Patroness of Persons with Developmental Disabilities,
of the Unwanted, of the Disfigured, and of
those about to die by abortion.
Feast Day - April 13

Blessed Margaret (B. Margherita) of Castello (1287 -1320) was born to noble parents in Metola, Italy.  She was born totally blind, crippled (one leg considerably shorter than the other), and her face was very deformed.  She also had severe spinal curvature (hunchback) and dwarfism.  Determined to keep her out of the public eye, her father had a room without a door built onto the side of the parish church and walled Margaret inside this room when she was six. Here she lived for years, never being allowed to come out. Her food and other necessities were passed in to her through a window. Another window into the church allowed her to hear Mass and receive Holy Communion. The parish priest became a good friend, and took upon himself the duty to educate her. He was amazed at her docility and the depth of her spiritual wisdom.

After these years of imprisonment, her parents took her to a shrine in Citta-di-Castello to pray for a cure. When none occurred, they abandoned her in a street nearby the shrine, and left for home, never to see her again.  At the mercy of the passersby, Margaret had to beg her food and eventually sought shelter with some Dominican nuns.

At the age of fifteen, Margaret received the habit of a tertiary from the Dominicans, and thence forth, she lived a life entirely devoted to God. She spent the next 18 years tending the sick, visiting prisoners, and praying. People for whom she cared sometimes recovered miraculously—gaining her a reputation for sanctity.

When one of Margaret's friends expressed sympathy for her bodily afflictions, Margaret reassured her: "If you only knew what I have in my heart!"

Bl. Margaret lived a life of hope and faith, practicing heroic charity, though little was shown her in return. She came from a home where she was deprived, not because her parents had no wealth, but because they valued their material wealth and status more than their spiritual treasures.

Deprived of all human companionship, Margaret learned to embrace her Lord in solitude. Instead of becoming bitter, she forgave her parents for their ill treatment of her, and treated others as well as she could. Her cheerfulness stemmed from her conviction that God loves each person infinitely, for He has made each person in His own image and likeness. This same cheerfulness won the hearts of the poor of Castello, and they took her into their homes for as long as their purses could afford. She passed from huse to house in this way, “a homeless beggar being practically adopted by the poor of a city” (Bonniwell, 1955).

She died in 1320 at the age of 33 amidst the companions who loved her, and was buried by their wish in the parish church. Her incorrupt body can be seen under the main altar in St. Dominic Church, Castello, Italy.

More than 200 miracles have been credited to her intercession since her death. She was beatified in 1609. Thus, the daughter that no one wanted is now one of the glories of the Church.

Blessed Margaret is also the patroness of The Disabilities Ministry, Archdiocese of Atlanta.

Thanks to the Dominican Sisters of St. Cecilia (Nashville) for the basis of this narrative.