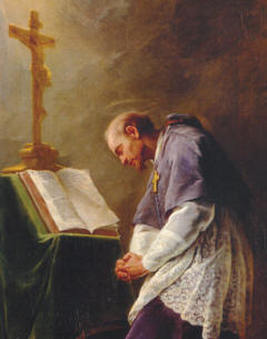 Saint Francis de Sales (1567-1622) was a key figure in the Counter Reformation in France. He was a member of an aristocratic family of Savoy and was trained for the law, but he entered (1593) the priesthood against his father's wishes. His first years in the priesthood were spent in the district of Chablais preaching to its Protestant inhabitants. Credited with many conversions, he was made coadjutor bishop of Geneva in 1599 and bishop in 1602; he resided at Annecy in nearby Savoy. His fame as a preacher spread abroad, and from 1600 until his death he delivered Lent and Advent sermons in many of the great cities of France. In his diocese he set up schools and paid special attention to the poorer parishes. Francis is credited with bringing some 40,000 Protestants back to the Roman Catholic Faith following his motto, “He who preaches with love, preaches effectively.”

In 1605, an indigent young man named Martin, a deaf and mute from birth, came almost daily to a house in Roche, France, where Bishop de Sales was staying, to ask for alms. He was a strong young man fit for all kinds of work, and the Bishop’s housekeeper often allowed him to help her in payment for the Bishop’s generosity. One day a servant introduced Martin to the Bishop.

As a result of his handicap, Martin, who was about 25 years old, had never received any kind of education – or instruction in the Catholic faith. (It was presumed by all of the educated people of that age (the 17th century) that a deaf-mute was a mentally handicapped person and that trying to educate or trying to communicate religious truths to such a person would be a waste of time.)

At the time of their meeting, St Francis de Sales was visibly disturbed and touched with pity for the unfortunate Martin. St Francis realized that the poor man would remain forever ignorant of God and the rich mysteries of the Faith and that his lack of instruction would forever keep him from receiving the Sacraments of Penance and the Eucharist.

After considering young Martin’s condition for a time, St. Francis determined that he would undertake the instruction of the young man. By using signs that he formed with his hands and fingers, St Francis personally began to teach Martin about the Catholic Faith. Martin, as was soon clear, was highly intelligent and a very good pupil. After a period of time, through his gentle patience and persistence and with the signs and gestures he had invented for the purpose, St. Francis succeeded in instructing Martin about God and His love for all men. All went so well that eventually Martin was able to receive the Holy Eucharist for the first time in 1606. Two years later, Martin was confirmed.

St Francis eventually hired Martin as his gardener and brought him along with him when he returned to his episcopal household in Annecy, France.

Thanks to the National Catholic Office for the Deaf for the basis of this narrative.