St. Mark Ji Tianxiang couldn't stay sober, but he could keep showing up. 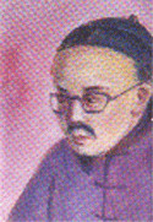 For years, Ji was a respectable Christian, raised in a Christian family in 19th-century China. He was a leader in the Christian community, a well-off doctor who served the poor for free. But he became ill with a violent stomach ailment and treated himself with opium. It was a perfectly reasonable thing to do, but Ji soon became addicted to the drug, an addiction that was considered shameful and gravely scandalous.

As his circumstances deteriorated, Ji continued to fight his addiction. He went frequently to confession, refusing to embrace this affliction that had taken control of him. Unfortunately, the priest to whom he confessed (along with nearly everybody in the 19th century) didn’t understand addiction as a disease. Since Ji kept confessing the same sin, the priest thought, that was evidence that he had no firm purpose of amendment, no desire to do better.

Without resolve to repent and sin no more, confession is invalid. After a few years, Ji’s confessor told him to stop coming back until he could fulfill the requirements for confession. For some, this might have been an invitation to leave the Church in anger or shame, but for all his fallenness, Ji knew himself to be loved by the Father and by the Church. He knew that the Lord wanted his heart, even if he couldn’t manage to give over his life. He couldn’t stay sober, but he could keep showing up.
And show up he did, for 30 years. For 30 years, he was unable to receive the sacraments. And for 30 years he prayed that he would die a martyr. It seemed to Ji that the only way he could be saved was through a martyr’s crown.

In 1900, when the Boxer Rebels began to turn against foreigners and Christians, Ji got his chance. He was rounded up with dozens of other Christians, including his son, six grandchilden, and two daughters-in-law. Many of those imprisoned with him were likely disgusted by his presence there among them, this man who couldn’t go a day without a hit. Surely he would be the first to deny the Lord.

But while Ji was never able to beat his addiction, he was, in the end, flooded with the grace of final perseverance. No threat could shake him, no torture make him waver. He was determined to follow the Lord who had never abandoned him.